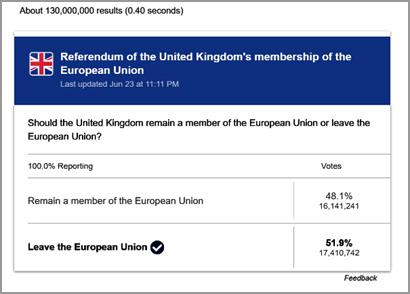 Brits voted Thursday to leave the European Union, confirming pre-vote analysis of search queries by several agencies and data companies. Those who wanted the UK to "leave" won 51.9% of the vote vs. Remain at 48.1%, which could have provided valuable insights months prior if the UK government had taken hints from search queries. On Friday, Google shared the vote results at the top of the search query for "brexit."

Data from Hitwise, a division of Connexity, showed that in February searches on UK engines to leave the EU outnumbered those that suggested Brits wanted to remain by a margin of nearly 5:1.

Then in May, Hitwise analyzed the daily search behavior of three million UK Internet users and found hints as to the most important topics around the historic event. Expats, House, Students, Holiday and Children were the top search terms around the EU Referendum. House, prices, workers, rights, and ISIS were the top five around Brexit.

The top keywords included in searches for “EU Leave” and “EU Stay” from May 1 through 28, 2016. The analysis around the searches focused on "EU leave," show that concerns and motivations were closely linked to the immigration policy, while the economic circumstances offered by EU membership appeared the top reason for searches focused on searches related to the UK remaining in the EU or "EU stay."

Individuals age 55 and older were more heavily represented among those searching to leave, perhaps indicating a desire among younger voters to remain with the status quo and among older voters to go back to "the old way."

The share of searches to leave are evenly split between men and women. However, a clear female bias can be seen in searches to remain in the EU, with 54% of those conducting searches around remaining in the EU were female, the remainder were male.

Mavens of London also previously published search analysis on more than 3.5 million Google search queries related to Brexit. People searched the EU referendum in tandem with the economy 3.5 times as often as EU referendum and immigration.

Between January and April 2016, Google received 2,948,650 searches on the topic. While the majority were general queries such as "EU Referendum," the Economy and Immigration were clearly the two issues of most interest to British voters.