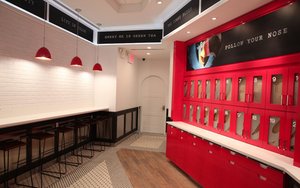 On July 4, The Kellogg Company will open an all-day cereal café, called Kellogg’s NYC, in Times Square, which (although the company isn’t saying this) looks to be custom-designed to help win Millennials over to cereal.

The restaurant, at 1600 Broadway, will offer dishes made of Kellogg’s cereals and ingredients such as lime zest, pistachios, marshmallows, thyme, blueberry jam and ice cream. Many of the menu items were created by Christina Tosi, chef and owner of the Milk Bar bakeries.

The format will also allow diners to customize their dishes by “incorporating dozens of toppings,” and offer an assortment of juices and coffee from “artisanal” purveyors, according to Kellogg.

In what Kellogg describes as a “fun, new approach to service” (albeit reminiscent of the city’s automats), customers will pick up their orders through cabinet doors.

Each order will come with a surprise — most often a small item like the ones that used to come in cereal boxes, but sometimes a big prize. Plans call for giving away tickets to the smash Broadway hit “Hamilton,” for instance, according to The Wall Street Journal.

Menu items, which also include evening snacks and ice cream treats, are priced between $6 and $8, and will change every three months, reports Kellogg.

There will also be a carry-out option, and there are plans to launch a delivery service later in the year.

The café is meant to be “a destination that reminds guests of home and drives new curiosity around the cereal bowl,” says Kellogg. “We'll give guests a chance to experience cereal, something they've been connected to their entire lives, in a completely new way,” added Rudolf, in the café announcement.

Millennials’ failure to embrace cereal in favor of higher-protein, more portable items like yogurt and breakfast tacos is a key reason for the category’s ongoing sales declines.

Kellogg and General Mills have been pursuing the generation with everything from new and revived “retro-cool” cereal varieties, to on-the-go packaging, to social media and other campaigns designed to promote cereal as an all-day snack (with or without milk).

Kellogg’s NYC may in part have been inspired by the popularity of Chobani’s café in Soho, which has seen sales grow 40% and doubled its size since it started as a 400-square-foot space in 2012, according to Fortune.