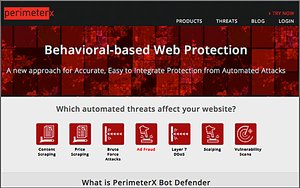 “Today, much more marketing fraud goes beyond simple clicks,” said Omri Iluz, PerimeterX co-founder and CEO. “There is one simple question we try to ask of all app interactions: is the user a real human being? We take into consideration hundreds of behavioral metrics, tracking sounds, sensors (accelerometer), taps, swipes and the like,” added Iluz.

“Humans don’t drag their fingers in a straight line on a mobile phone, nor do they tap on an icon directly in the middle. Bot Defender can pick up on these small differences in behavior” to make sure the fraudulent impression is logged as such, said Iluz.

With ad fraud adding up to around $8 billion in lost yearly revenue, mitigating such risks is of growing importance. According to Iluz, “We can expect [fraudsters] to improve. They are becoming more careful with their crimes, in some cases waiting a week after infiltrating a network to begin their attacks.” The pace at which these groups release new software is also increasing.