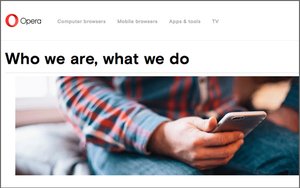 A few months ago, Opera Software ASA, the Norway-based browser/software company, said that a Chinese consortium of investors would be purchasing them for $1.2 billion. Today, they announced that that deal has failed to gain regulatory approval.

The deal failed to meet a July 15 deadline, but it is not clear which country’s government nixed the takeover.

Several of the investors have instead changed tacks and are now proposing to purchase some of Opera’s consumer business in a deal valued at $600 million. Opera’s eponymous mobile and desktop browsers, some technology licensing, and Opera’s 29.09% stake in Chinese joint venture nHorizon are now up on the block.

Opera Mediaworks, Opera Apps & Games (including Bemobi) and Opera TV, along with about 560 employees will no longer be sold. The Opera logo and brand are a part of the deal, so the new entity will have to find a new name in the next couple of months.

The original deal was valued so highly because of Opera Mediaworks, the mobile advertising division of the company that has accounted for more than 70% of the company’s revenue in recent years, and continues to grow.

The new transaction is expected to close during the second half of the third quarter; it has already received the approval of Opera’s board of directors.

Opera has been courting investors and looking for an exit for years. With this new deal, it appears they have finally found one, subject to approval.