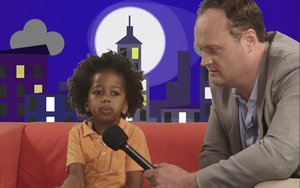 Buzzlie, a social news and entertainment site, has teamed up with Yahoo Storytellers to launch a new content marketing campaign, KIDS TAKE ON.

From a child’s perspective, the 15-episode branded video series offers humorous views on today’s most popular trends, events and celebrity news. Produced by Yahoo and Believe Entertainment Group, "KIDS TAKE ON" is hosted by Brad Blanks and depicts how kids react to pop culture topics, from summer movies to Hollywood celebs, as well as the presidential race.

Buzzlie will leverage Yahoo’s Gemini native video ads to promote this series across Yahoo’s properties and engage their audience. The videos are also searchable through Bing's and Google's engines.

The campaign, which launched in early July, leverages Yahoo Storytellers, a branded content initiative announced at Cannes Lions that Dasani, Farmers Insurance, and JetBlue have been using.

For JetBlue, it began with a short video the brand created titled "HumanKinda," said Kathleen Kayse, VP sales strategy and solutions at Yahoo. The campaign focuses on the idea that people are becoming too busy to remain human and kind, she said.

The JetBlue campaign is housed on Tumblr. Yahoo worked with four influencers to spread the word. The social influencers were chosen to share in the production of the videos based on consumer interest and authenticity, according to Kayse.