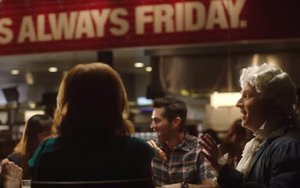 The casual restaurant chain is promoting its new Summer Grill menu, one item of which is a full rack of ribs for $10, a/k/a “a Hamilton.”

The campaign’s 30-second TV spot (below) shows a bewigged actor playing Alexander Hamilton telling Revolutionary War anecdotes as he dines with a group of modern young adults. Naturally, he offers to pick up the tab -- and to introduce them to his wig maker.

The ad was launched on July 18. TGI Fridays had that date declared “National Hamiltons Day” on the National Day Calendar, and played it up on its Twitter channel, using #NationalHamiltonsDay.

The spot will air during prime time on the Olympics starting Aug. 6, as well as on cable networks including MTV, Adult Swim, BET, SyFy, Spike, HGTV, FX and CMT. It’s also being run on Hulu and various online video networks, and as pre-roll on mobile.

The campaign, from the Made Movement agency, also includes a series of short videos dubbed “Meaty Thoughts,” consisting of the same actor offering humorous observations on topics including duels and the “man bun.” Those are being featured on the brand’s YouTube channel.

A mix of Hamilton-themed and general Summer Grill content will run on a variety of digital platforms.

Efforts and media also include programmatic display ads; Yelp; an audio-only version of the Hamilton TV spot on streaming audio; and videos on desktop, mobile, table devices and connected TVs.