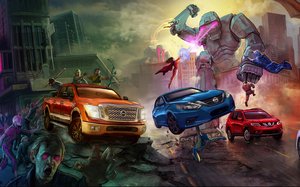 Nissan is launching a social campaign tied to ComicCon 2016, which kicks off today in San Diego.

Created by TBWA\Chiat\Day LA, the effort features superheroes, zombies, dragons, and of course, Nissan vehicles. The automaker teamed up with renowned illustrators to feature their vehicle lineup in epic battles.

Marc Simonetti, illustrator of the "A Song of Ice and Fire" universe on which the "Game of Thrones" TV series is based,  created a special series of comic strips featuring Nissan vehicles as the storied heroes as they take on the ultimate Sci-fi-fantasy Apocalypse, which of course includes aliens, zombies and robots.

Individual frames from the comic strips will be shared on NissanUSA  social media channels, and when combined, will create one epic story of Good vs Evil.

The campaign also will ask NissanUSA fans and followers to submit their own photos of their Nissan vehicles to be illustrated in comic-fashion by Brooklyn-based Illustrator Owen Brozman, illustrator of "You Have to F*****g Eat", the sequel to the best-selling children's book, "Go The F*** to Sleep.”

This isn’t the automaker’s first foray into the fantasy world. Nissan participated in the Middle East Film & Comic Con in 2014 where a Nissan Tilda was turned into a work of art. The vehicle, which is marketed in North America as the Nissan Versa, was transformed with Anime (a Japanese-derived cartoon style) characters being drawn on the vehicle.

In 2015, Nissan teamed with One Piece to release the “Thousand Serena,” a limited-edition Serena Highway Star S-Hybrid wrapped in comic book art. Only nine were created and a lottery open only to drivers in Japan with children determined who could buy the vehicles.