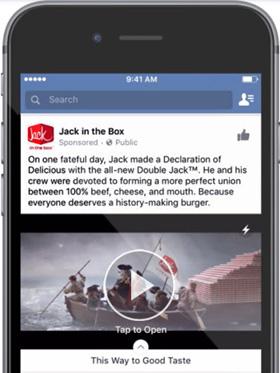 During the July 27 Q2 earnings call in which it announced impressive, mobile advertising-driven leaps in sales and profits, Facebook noted the success of a recent Jack in the Box campaign that employed its new Canvas format.

The goals included driving awareness of the campaign, which kicked off with a one-million-burger giveaway promotion; boosting Web site traffic; and increasing purchase intent for the new burger.

Jack in the Box worked with its creative agency, David & Goliath, its media agency, Horizon, and Facebook marketing partner Adaptly to create a Canvas ad unit and a Facebook video ad and deploy them over six weeks in February and March.

Both ads featured the brand’s spokesman, Jack Box, in a takeoff on George Washington’s crossing of the Delaware.

The Canvas ad offered two calls to action: upload a photo of yourself beside the face of the brand, or find a Jack in the Box location near you.

The 60-second video ad (see shortened version below) showed revolutionary Jack Box offering the new Double Jack burger to a grateful, passing jogger, and directed viewers to the brand’s site to register to receive a coupon via text or email. Coupons were  redeemed at the chain’s locations by showing them on a mobile device or bringing in a printed-out version.

The ads targeted Millennials on Facebook, plus two custom audiences: customers who visited the restaurant’s Web page or engaged with previous video ads, and a group of QSR purchasers identified by Datalogix.

The campaign yielded a higher-than-estimated average view rate of 23 seconds on both Canvas and the video ad, according to Facebook. Also, for those exposed to the Canvas ad, versus those who were not, there was a 13-point lift in ad recall; an eight-point lift in purchase consideration; and a five-point lift in product awareness.

Moreover, there was a 44% lift in purchase intent for the Double Jack burger, and a 200% lift in site traffic driven by the “find a location” call to action in both ads, Richard Cran, Jack In the Box’s VP, marketing communications, tells Marketing Daily.

“'Declaration of Delicious' and the launch of the Double Jack was one of our largest campaigns of the year, so leveraging the partnership and using this new format, which was in beta, was very exciting for our brand,” Cran says.

Overall, “we were very pleased with the 'Declaration of Delicious' campaign,” he adds. “We made a strong statement about the quality and ‘craveability’ of our burgers, exemplified by the Double Jack. Post campaign research has shown that consumers understood this message loud and clear, and viewed our brand and our products more positively as a result. Strong sales of the Double Jack showed that this sentiment converted into action.”

Jack in the Box “came close” to giving away the full million burgers, which “drove a major spike in trial” that in turn led to repeat purchases and strong sales across the entire quarter, Cran reports.