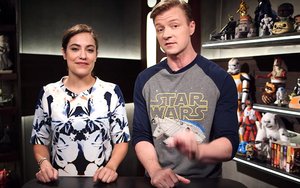 Verizon has signed on with Disney to launch "The Star Wars After Show," a new weekly digital series that plays off the seven-minute recap show called "The Star Wars Show," which highlights the latest news and events, as well as interviews with super fans.

"The Star Wars After Show" provides fans with a deeper dive and insider perspective on the news and content presented weekly on "The Star Wars Show" from the people who work on Star Wars daily.

Both shows are a weekly digital series hosted on YouTube. The segments will run at least through the end of the year.

"Verizon is the first sponsor, but there will likely be more," said Mickey Capoferri, senior director of content and programming at Lucasfilm. "It will only be done if we can do it right, which means organically, and if it's mutually beneficial."

While it's easy to see how Verizon can benefit from sponsoring a 'Star Wars"-related show, Capoferri said "The Star Wars After Show" will open the brand to a "little different audience" since it will live on Verizon's YouTube channel.

Shot on set of "The Star Wars Show," and hosted by one or both of the main show hosts, the "After" show will feature up to four Lucasfilm employees and guests, similar to a talk show, to expand on and debate the happenings of the week.

"The Star Wars Show" this week will begin to include Verizon in the closing remarks and in select social media posts of micro content on Facebook and other sites.  The "After" show premiers Thursday, with a new show running once weekly after, featuring Verizon branding at the introduction and closing.

"Verizon will promote the "Star Wars After Show" in social media, including posts on Twitter and Facebook," said Kristin Rooney, director of sponsorships and events at Verizon. "The show will also be featured on Verizon’s YouTube channel.”

Initially, when "The Star Wars Show" launched in May 2016, Lucasfilm's strategy wasn't to generate revenue. It did not carry advertising and was not designed to pitch products, but rather keep the brand alive in the minds and pockets of consumers, per one report.

It is hosted by Andi Gutierrez and Peter Townley. The duo cover exclusive news and stories about the films, TV shows, books, comics, video games, toys, merchandise, fan culture, and art from behind the scenes. Fans see never-before-seen footage, such as insight into set props and comedy sketches.