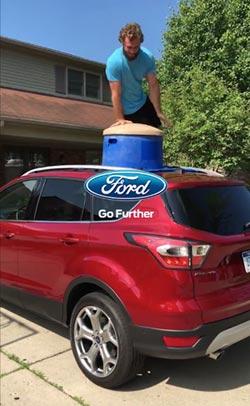 Ford Motor Co. is launching a campaign for the 2017 Escape with an Olympics theme, including a Snapchat lens.

The automaker pays attention to what is happening in culture to identify opportunities that align with its brand promise, says Lisa Schoder, Ford’s digital marketing manager. Ford is not an official Olympics sponsor so the campaign doesn't actually mention the Olympics, just alludes to it.

“This cultural event presents a massive opportunity to elevate our Ford SUV ‘Life is a Sport. We are the Utility’ platform to make a stronger brand impact,” Schoder tells Marketing Daily. “It’s a natural tie to the feeling that I can do more, learn more and be more. As you’ll see in our Snapchat content, ‘We Are All’ isn’t about one single example, but everything we all do in our active, busy lives with Ford SUVs the utility to help us be unstoppable.”

Broadcast and digital launch Aug. 5 and will be joined by a Snapchat lens, launching Aug. 13. The campaign advances Ford’s “Unstoppable SUV” platform.

This is the first time Ford has ever purchased a sponsored lens. It will highlight the “We Are All Fans” portion of the campaign. For 24 hours, Ford’s lens will enable U.S. Snapchat users to paint their face in a red, white and blue design and activate a confetti shower.

“Ford is both a data-driven as well as a test and learn marketer,” Schoder says. “With the growth and maturation of the Snapchat platform audience, it makes sense to include it in our plan at this time.”

The Snapchat effort coincides with the likelihood that social media will play a bigger role in Rio Olympics than previous Games, with viewers 85% likely to use second-screen devices, according to Global Web Index.With much of that attributed to Millennials, according to a separate study from the Rubicon Project, 79% of Millennials plan to watch it online, with 7 in 10 watching on a mobile device.

Ford’s Snapchat launch will also feature the first time the automaker has ever shot video advertisements in a vertical, smartphone style. The Snap Ads, which will appear between “Stories” in the “Discover” section on Snapchat, will match the ethos of the games.

On Twitter, Ford will share more than 200+ pieces of real-time content based on its SUV brand personality, using emojis and GIFs tied to different sports over the duration of the competition. This second-screen experience content will be shared from the @Ford handle.

Creative for the Escape highlights its tech and capability. It will showcase fans and athletes engaging with the vehicle in fun and sporty ways. Ford SUVs saw an all-time record for first-half sales in 2016, with Millennials contributing to the overall surge, according to the automaker.