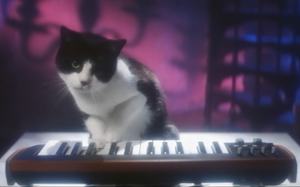 Created by Adam & Eve/DDB London, the campaign’s first digital content release features a 1980s-style music video starring the Electric Furs — a fictitious band made up of real cats “singing” and “playing” instruments — performing a feline rendition of “Don’t You (Forget About Me)” by Simple Minds. The video takes a tongue-in-cheek look into how cats may try to convince their humans to remember to treat them, too.

“Cat videos are brilliant fun, and millions of people watch them every day,” said Richard Brim, executive creative director at Adam & Eve/DDB London, in a release.

The spot is live on the Temptations  Facebook and YouTube channels, and  the “Don’t You (Forget About Me)” video remake includes a long-form edit as well as a 30-second spot. There will be shorter video cut downs for release on the Temptations brand’s social channels in the coming weeks.

The video will be supported by a number of integrated marketing efforts, including creative digital content, social media posts and partnerships on popular platforms such as the Snapchat Discovery and BuzzFeed.

“With only half of cat owners treating their cats, the Temptations brand always looks for fun, creative ways to bring attention to the cat treating category,” said Arren Beach, Temptations brand manager, in a release. (The July 2016 Nielsen Homescan Panel found that 54.4% of cat-owning households feed cats treats.)