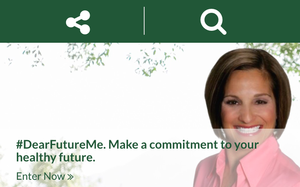 Themed #DearFutureMe, the effort focuses on the importance of thinking about future health today. Retton reflects on her personal health goals and experiences to inspire others to pay it forward when it comes to their own future health.

"Nature's Bounty and legendary athlete Mary Lou Retton have partnered on the #DearFutureMe campaign to help flip the health conversation from short-term goals toward enjoying a long, active healthy lifestyle in the future," said Chris O'Connor, vice president, Nature's Bounty, in a release.

"Bar none, Mary Lou personifies the commitment to health and wellness that has been at the core of Nature's Bounty's trusted experience for nearly 50 years."

To help give a boost to setting their #DearFutureMe health goals, consumers can upload a photo with a caption that captures their personal commitment to a healthier future. All accepted submissions are also eligible to win a Future You Prize Pack.

Consumers can learn more about the program or enter the sweepstakes at a dedicated Web site.

The "Dear Future Me" program coincides with the national launch of Nature's Bounty's 30-second TV spot, "Better off Healthy." The spot fancifully explores the idea of being able to give advice to your "future self" and spotlights the benefits of Nature's Bounty Fish Oil.