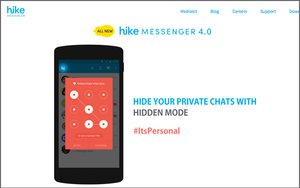 Hike, an Indian over-the-top (OTT) chat app slash WhatsApp rival, announced that it has received $175 million in a series D round led by Chinese investors Tencent and Foxconn, a manufacturing firm. Hike is currently valued at $1.4 billion with this latest round of funding, making it India’s first social unicorn.

Tencent developed WeChat, an extremely popular chat app in China. It is a big name to have as an investor, but the round also included previous investors and new ones from the U.S., which were added earlier this year.

Hike’s user base is almost entirely homegrown, with 100 million users in India, 90% of which come in under the age of 30. WhatsApp, the Facebook-owned OTT chat app is Hike’s biggest competitor, with more than 70 million users in the country.

Due to their heavy usage and widespread popularity, chat apps have been transitioning toward one-stop shop-style utility, incorporating ride-sharing apps, ecommerce and even messenger bots for fast food.

Being free, they make their money from either selling customer data or sponsorships within various aspects of their apps, like stickers or in-app purchases.

Hike has integrated a couple of other user-friendly features as well, including the ability to hide message threads from prying eyes that take your phone and send SMS messages to friends that don’t use the app.