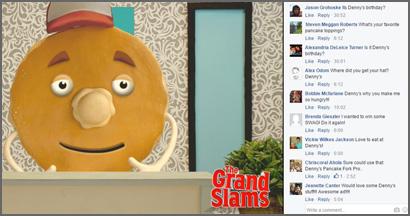 In February, as reported by Marketing Daily, Denny’s used a pre-produced video featuring animated characters from its “Grand Slams” video series for a social media campaign that used a QVC-like format to offer free, branded merchandise.

That effort generated 17 million video impressions across YouTube and social and digital platforms, and resulted in 1,400 items being given away, according to the brand’s agency, Erwin Penland. The effort was promoted on Denny’s’ social channels, but only slightly in advance.

Denny’s has now morphed the concept by running what the team believes to be the first live, animated social events — with a character interacting with fans in real time. The agency developed the software technology behind the live animation activation.

These served to kick off another round of QVC-style branded merchandise giveaways (dubbed “Zero Easy Payments”). Immediately following the animated live events, the brand posted  information on Facebook, including a link to a Web site (dubbed BSN, for the “Breakfast Stuff Network”) where fans could go to claim their freebies.

While the team is still tallying the total results, the agency reports that as of the morning of Aug. 17, the afternoon and 6 pm events had generated 8,877 and 6,727 video views, respectively, and 10,056 and 3,825 engagements, respectively.

Early analytics show that the giveaway site had about 14,000 unique visitors. Some 1,500 items were given away.

This time, the team also did significant pre-promotion – although much of it did not specifically allude to the live, animated events or second giveaway session to come.

The brand began teasing an upcoming event on Aug. 8, by posting an unboxing spoof video from Erwin Penland showcasing the “ForkPro” (a fork with slightly longer tines than a standard Denny’s fork). The video “reviewer” mentions that he got a ForkPro in advance of the item’s airing on the Breakfast Stuff Network.

Throughout that week, via organic and paid social content, the brand began using more short videos to alert fans that they would have a chance to get their own ForkPro for free on Aug. 16.

But the actual Facebook Live event wasn’t mentioned until the afternoon of the day before.

“This campaign, including the Facebook Live activation, is a great example of us connecting with our audience in a way that makes engaging with the Denny’s brand fun and personal,” said Denny’s CMO John Dillon. “This supports our larger social media strategy to serve as an online extension of what you would expect to experience in a Denny’s restaurant: a comfortable place where friends, family and complete strangers can come together and have a fun conversation.”