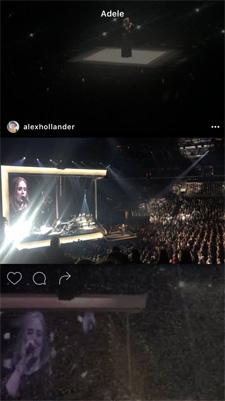 Consistent with social media’s full embrace of live video, Instagram is launching a new channel within its Explore tab.

“This channel collects the best videos from concerts, sporting events and more,” said an Instagram spokeswoman. “For example, when one of your favorite artists has a concert in another city, you can come to Explore and watch videos of the show as it happens,” she said.

For Instagram, the new channel is part of a broader effort to diversity its Explore tab. Most recently, it added “Picked for You” channels featuring videos grouped by users’ preferred topics and interests.

As a result of these of related efforts, video viewership is growing on Instagram. In fact, the total time users spent watching video increased 150% over the past six months alone, according to internal figures.

More broadly, Instagram is holding its own against Snapchat and other social rivals.

Indeed, the network has officially surpassed more than 500 million monthly active users -- more than 300 million of whom use the app daily, it announced in late June.

Of course, only about 100 million of those monthly active users live stateside. Still, the new figures mean that Instagram’s monthly user base more than doubled over the past two years, and it added its last 100 million active users faster than the previous 100 million.

On average, Instagram now sees about 95 million photos and videos shared per day, and about 4.2 billion” likes” per day.

Worldwide, revenue from mobile video will reach $25 billion by 2021, according to recent research from Strategy Analytics. The money is mostly coming from advertisers trying to reach a growing mobile-video audience.

“The strongest growth in mobile video revenue will come from advertising-funded content as advertisers look to catch up with the increasing quantity of video consumption,” Wei Shi, an analyst at Wireless Media Strategies, noted in the report.

The report also predicted that mobile-video viewers would more than double to 2 billion users by the end of 2022.