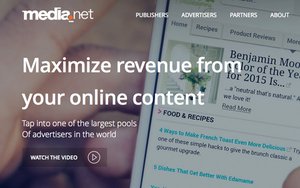 A consortium of Chinese investors led by Zhiyong Zhang, chairman of Beijing Miteno Communication Technology, have acquired the ad tech startup Media.net for about $900 million in an all-cash deal. Eventually, the company will land in the sole hands of Miteno, a Chinese tech conglomerate.

With a foothold in the Chinese capital markets, Media.net sees new opportunities through organic growth and acquisitions in China and the U.S. The transaction, now closed, was paid with $426 million from the consortium and the rest diversified in a pool of global investment funds co-owned by Divyank Turakhia and Bhavin Turakhia.

“The business received a lot of interest, seven bidders from around the world,” Bhavin Turakhia said in a prepared statement. “During the intensive phases, there were 20-plus lawyers in a room, and the excitement was palpable. I am excited about being able to get back to launching and growing the new startups that I have been working on.”

Breaking distribution into buckets, the company manages about $450 million of annual advertising revenue through its platform, about 52% generated by mobile users. Some 90% of Media.net's total revenue comes from the U.S.

With seven offices worldwide, including global headquarters in Dubai, and U.S. headquarters in New York City, Media.net has more than 800 employees, up from 650 in 2015.

Company stats estimate its technology manages traffic that generates more than 70 million paid ad clicks each month, as of the first quarter in 2016. It reached this goal by identifying user search intent and displaying relevant search keywords that lead to display of search ads bought by advertisers on a cost per click (CPC) pricing model.