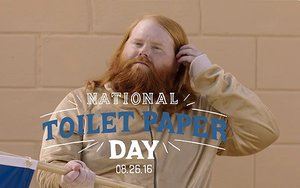 The Georgia-Pacific brand is promoting a 24-hour sale on Amazon and encouraging consumers to sign up for repeat delivery service. To promote, there’s a humorous 60-second video on YouTube.

A solemn announcer reads the tongue-in-cheek copy over hilarious images. “National Toilet Paper Day is not like other holidays. There are no gifts. No parades. No jolly people in suits,” while an image of Santa in his non-work clothes kicking back in front of the TV is shown. “No one gets this day off work.”

“We even share it with another holiday, which is way more important than National Toilet Paper Day, and we’re a toilet paper company,” says the announcer as “Women’s Equality Day” is shown on the screen along with a  a woman making a muscle on a seesaw that is balanced in her favor.

Going along with being the brand behind the “Designed to be Forgotten” campaign and forgettable bathroom experiences, National Toilet Paper Day can easily be considered the most forgettable holiday of the year. And that’s fine with Northern, as long as consumers still head over to Amazon  and stock up.

As consumers increasingly turn to ecommerce for purchases of household items, Quilted Northern is also putting an unconventional twist on the online shopping experience for consumers in New York and Seattle by creating mini pop-up stores, says Jason Ippen, senior brand director at Quilted Northern. The stores are just large enough for a hand, so that your phone becomes the “store,” reflecting the growing importance of mobile shopping. Additionally, the pop ups mirror the local architecture and environments of each city in amazing detail, from the multi-story buildings of New York City to the urban mall design in Seattle.

Droga5 created the video and conceived of the idea of branded stores and worked with Unit9 of London to bring these mini pop-ups to life.

This isn't the first time Quilted has taken a lighthearted approach to its marketing. The brand released another humorous video in connection with April Fool's Day.

“We’re serious about designing forgettable bathroom experiences that no one has to remember, and we like to have a little fun in doing this," Ippen tells Marketing Daily.  "We recognize that people don’t like to think about toilet paper, or the process of buying it. Leveraging key moments in time to bring our 'Designed to be Forgotten' campaign to life, like we did with National Toilet Paper Day and April Fool’s Day, allows us to engage with consumers in unexpected ways that get them to think about Quilted Northern in a not-so-serious manner.”

In addition to saving up to 30% shoppers can save up to 15% more when they subscribe to recurring deliveries of eligible Quilted Northern products with Amazon’s Subscribe & Save Program.

“If nobody takes National Toilet Paper Day seriously, how can we take it seriously?" Ippen says. "With no parades or days off from work, it’s a forgotten holiday, as it should be. With this campaign we saw an opportunity to acknowledge it in a self-deprecating way, and the least we could do was try to turn it into the Black Friday for toilet paper shopping and offer a great deal on Quilted Northern through Amazon. The various campaign elements supporting this activation, such as our 'A Most Forgettable Holiday' video and mini pop-up stores in New York and Seattle, are meant to reinforce the humor in all of this.”