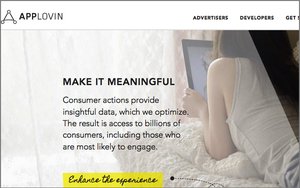 Ad network AppLovin has been courted by a yet-to-be-named Chinese buyer that may be willing to buy the startup for $1.5 billion, it was reported last week.

AppLovin has had particular success with mobile ads, doubling its revenue from 2014-2015 and hitting over $200 million. There are rumors that the company is projecting for $500 million in revenue this year.

The company has not had any venture funding and operated in “stealth mode” for a number of years after its founding in 2012. It has gotten some angel investors on board, to the tune of $4 million.

2016 has been an acquisition-heavy year in ad tech, with Chinese companies and conglomerates in particular making big advances on markets through acquisitions. Opera was slated to be bought by a Chinese conglomerate before the deal was modified to exclude OperaMediaworks, the company’s mobile division.

Chinese companies have already invested more money overseas this year than they did in all of 2015. According to Dealogic, if China continues its present trend, it will be the first time since 2007 that a country has beaten the U.S. in overseas investments.

Chinese companies have also withdrawn 15 investments as of May -- most notably with mobile ad tech company Quixey. Those deals were collectively worth about $24 billion.