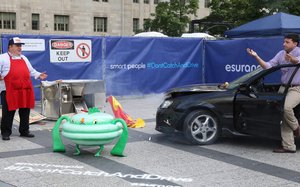 The scene on Chicago’s Magnificent Mile featured a car’s run-in with a hot dog cart, all caused by a fictional distracted driver and Esurance mobile game-inspired creature that causes fender benders, the Fenderbendix, the kind of creature you don’t want to catch.

As visitors walked past the jarring scene, they discovered that nobody was hurt. This time. But one injury every minute of every day results from distracted driving, according to the insurance company. And it’s more than just texting and driving. Esurance had a message for them: “Smart People #DontCatchandDrive.”

The hashtag is being used in marketing efforts, including the online video of the set-up.

“We’re always looking for unexpected, relatable ways to connect with people. Staging this scene allowed us to capture people’s attention and send an important message about safe driving,” said Alan Gellman, chief marketing officer at Esurance, in a release. “We understand the appeal of exciting modern technology like augmented reality gaming, but we want people to be smart about how they use it.”