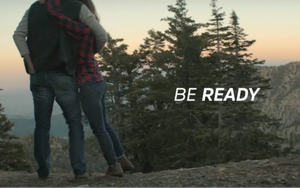 Jeans sales are picking up, and in an effort to drum up some derring-do for its denim, VF Corp. is repositioning both Lee and Wrangler jeans with new fall marketing campaigns.

Wrangler, while still hanging on to ads featuring heroes of a certain age, including football players Brett Favre, country legend George Strait, and NASCAR’s Dale Earnhardt, Jr., as well as its lineup of rodeo stars, is making a play for a younger audience. The Greensboro, N.C.-based company is switching to what it calls “a more emotionally based lifestyle marketing this fall.”

Instead of stressing the brand’s hard-working denim heritage, new national TV ads underscore the famous W at play, including camping, motorcycles, and pool tables. Set to Howling Tongues’ fresh take on Credence Clearwater Revival’s Up Around The Bend, spots tell viewers to “Be true. Be bold. Be yourself. Be comfortable in your own jeans.” Toth & Co. is the agency, and ads broke during college football programming.

“We believe that there is equity and share to be gained by promoting our brand’s unique DNA in a way that resonates with a broader range of viewers while reaffirming the attributes that have earned Wrangler so many loyal consumers,” says Tom Waldron, president of Wrangler, in the announcement, adding that the company hopes the updated positioning pays off in “increased awareness and relevance.”

VF’s Lee brand is also getting some new moves, with a #MoveYourLee campaign from GSD&M. The new campaign goes for laughs, spoofing the superpowers of the Lee Man and the Lee Woman (luckily, they found each other and are blissfully married.) “They’re not just jeans,” ads proclaim. “They’re freedom pants.” A social-media focus encourages fans to upload their best 10-second dance videos tagged #MoveYourLee on Instagram, for the chance to win prizes. The Lee effort stars the flexibility of jeans infused with spandex and other stretchy fibers, which VF hopes can give denim a leg up in the battle against yoga pants.

It might be right. Women’s Wear Daily, citing the NPD Group, recently reported that denim sales are up after a long slump sparked by the athleisure trends, with sales climbing 2% to nearly $13 billion in the 12-month period ending in June. And women, who buy about 60% of all jeans, bought 304 million pairs.

In its most recent quarterly results, VF says sales of jeanswear rose 3% to $629 million (or 6% on a neutral-currency basis), with Wrangler notching a 2% gain and Lee sales rising 8%.