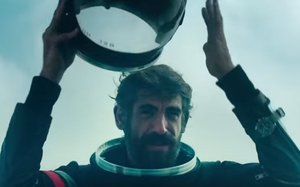 Does Equis today released a teaser video (below) revealing the brand’s new “Most Interesting Man in the World.”

The actor chosen to replace 77-year-old Jonathan Goldsmith, who was retired in March, is 41-year-old French native Augustin Legrand. The actor speaks Spanish as well as English — an advantage for nearly any brand these days given the importance of Hispanic consumers — and particularly for a beer of Mexican origin that is now owned by Heineken.

Indeed, the exchange between the character and a bartender shown in the video — which is now posted on the brand’s Twitter page as well as YouTube — is in Spanish, with English subtitles.

While the character’s hyper-masculine suaveness factor is similar, the new actor is shown engaging in more physical adventures than the original, such as jumping into a well to retrieve a soccer ball for his friends, running (presumably chased by villains) through city streets with an attractive woman, and finding his way through a cave.

In announcing the choice, Dos Equis and Havas New York — which also created the hugely popular original campaign — took pains to stress that people’s conceptions of what is interesting have changed over the years, and that the new Most Interesting Man is “edgier,” “rough-and-tumble” and “more daring.” The character will also be shown “celebrating good times with friends wherever he travels,” said Dos Equis VP of Marketing Andrew Katz — which will presumably make him more relatable to the highly friends-oriented Millennial generation.

The man-of-action approach (and the inclusion of activities like soccer) should readily lend itself to synergy with one of Dos Equis’s major marketing investments in the U.S.: Its sponsorship of the College Football Playoff.

In fact, the first television spot starring Legrand will debut on Oct. 19 to sync with the Playoff sponsorship.

And in perhaps the most significant update of all, the brand will use TV and social to bring viewers into the action as the character’s adventures unfold in real-time, the brand reports.

The October launch will include social integrations on Snapchat, including a national lens available for College Football Game Day, Oct. 22.

“In the coming weeks, fans will have the opportunity to get to know the new character in a uniquely interactive way,” according to Katz.