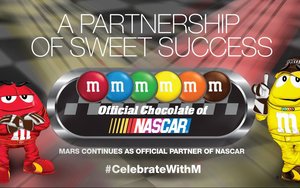 Mars Chocolate North America and NASCAR are extending their  partnership through 2019, and the company will continue its designation as the Official Chocolate of NASCAR, which it has held since 2000.

Since entering NASCAR as a team sponsor more than 25 years ago, Mars Chocolate has steadily increased its level of participation in the sport.

Mars’ M&M’S brand will host race fans during Richmond International Raceway’s inaugural Fan Appreciation Weekend. To promote its 75th Anniversary, the brand will roll out the red carpet and give fans a VIP welcome at the Front Stretch Gate on Saturday.

Between the official partnership and a historic championship run as the primary sponsor of the No. 18 M&M’S Toyota last season, Mars Chocolate is one of the most recognizable brands in the sport. The brand executes a fully integrated strategy that includes advertising, event marketing, social media, business to business, and associate engagement.

As the official chocolate, Mars Chocolate encourages fans to “Celebrate Race Day with M.” The campaign reminds fans to include the candy in their race day rituals. Many of Mars’ most iconic brands belong to the category, including M&M’S and Snickers. Additionally, Mars/Wrigley and Petcare iconic brands are also included, such as Skittles and Pedigree.

Two years ago, Mars renewed its relationship with Joe Gibbs Racing. Kyle Busch is the driver in the No.18 M&M’s Toyota Camry.

Mars has seen a 4-to-1 return on its investment in the sport, according to a 2012 study, measured by Mars tracking data. Beginning in 1990 as a team sponsor, the company's investment has grown to primary sponsorship on Ernie Irvan's No. 36 car in 1999 and official partner status with NASCAR in 2006.