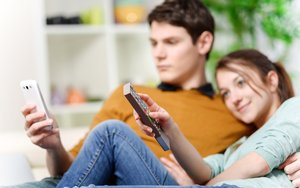 More distractions -- from second-screen devices and/or other people in a room viewing at the same time -- have a major effect on whether TV viewers notice TV advertising.

Without a second-screen distraction, whether solo viewing or co-viewing with a friend, more than 90% of the viewers noticed TV ads. CRE defines this as “a viewer having at least one fixation on an ad.

But when adding a second screen for a solo viewer, noticing TV ads drops 75%.

Beyond “noticing” TV ads, the CRE says viewing, defined as total time in “fixation” using eye-tracking, is a more stringent measure. Results here are that solo viewers spent 58% of time in “fixation," which dropped to 43% when including co-viewers.

Access to second screens dipped these results even lower for solo viewers: 34% in fixation time. Adding co-viewers with a second screen drops the number to 25%.

Another study -- with research conducted by Hub Entertainment Research in conjunction with CRE -- focused on non-linear platforms: VOD, computer, tablet and smartphone, testing a variety of advertising delivery.

Some results: While TV screens can support full duration of advertising loads with reasonable recall, advertising on tablets and phones need “moderate or light ad loads” to have a recall advantage.

Also: Advertising repetition helps with recall, but leads to a more negative viewing experience. Fast-forwarding is detrimental to brand recall, but is used infrequently.

Hub Entertainment Research conducted this study from an online survey among 2,459 TV viewers. Respondents ages 16-54 were recruited and each was assigned one of five viewing platforms: live TV, VOD, computer, tablet or smartphone.