Nielsen Probes Viewers' Minds: Finds They Are Distracted By Screens, May Not Comply With People Meters 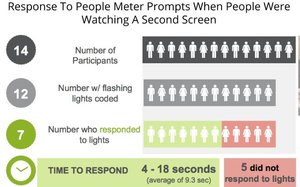 In a potentially alarming early warning signal for TV’s national advertising currency, an advanced neuroscientific study on the impact that “second screens” and other distractions have on people’s ability to view and engage with television found that the presence of a second screen might also impact the way Nielsen panelists respond to people-meter prompts.

The study -- which is part of an ongoing series of research commissioned by the Council for Research Excellence to understand the nature of watching TV in the current viewing environment -- was conducted by Nielsen Consumer Neuro, which utilizes a variety of biometric measurement techniques to understand people’s conscious and unconscious interaction with media.

The findings of the study (see related story with detailed coverage here), dubbed “The Mind of the Viewer,” were described as preliminary, especially the part testing response to people-meter prompts, but it suggested that the kinds of media distractions impacting the way people consume media may also be impacting the way the industry measures how people consume media.

When it comes to interacting with people meters -- the technology that is the basis for producing national TV’s advertising currency, Nielsen national TV ratings -- 25% of Nielsen people-meter panelists participating in the study did not respond to their prompts because they were looking at a second screen when the meter prompted them with a light.

Marci cautioned that the findings were “not conclusive” and based on a very small sample, but they are the first scientifically objective glimpse of the impact of second screens on Nielsen’s core TV research methodology.

The lab study utilized state-of-the-art biometric technology used by Nielsen Consumer Neuro, including eye-tracking to see where respondents’ eyes were fixated. Seven of the 12 Nielsen people-meter panelists tested responded correctly when the people-meter prompt came on. Five did not. Three of those five were fixated on their second screens at the time.

As preliminary as that finding might be, it is significant because one of the chief goals of the CRE is to conduct research on how to improve media measurement, especially in the way consumers experience and interact with media changes. The CRE, which was created a decade ago by a grant from Nielsen as part of its promise to Congress to fund independent research on media measurement methodologies, has engaged in a wide variety of studies since its inception. And while it is funded by Nielsen, its committees operate independent of Nielsen.

In the case of the “Mind of the Viewer” study, it commissioned a unit of Nielsen to conduct it. The CRE said the data is still being analyzed and plans to share more detailed findings of the study in future presentations, but based on the research presented by Nielsen’s Marci in New York Thursday, distractions are playing a significant role in the way people interact with TV -- both programming and advertising content.

He said it’s not a black-and-white situation, and that in some cases things that might seem like a distraction -- including co-viewing and even second screens -- can enhance engagement with the way people watch TV, triggering emotional responses, and even contributing to conversations about what people are watching on the screen.

“This is not an all or nothing situation,” Marci explained, adding: “The assumption is that people are either 100% glued to the TV watching continuously, or they’re watching their second screen and nothing is getting through at all. Clearly, we are seeing a lot of shades of grey.”

The CRE described the research as a “benchmark” study in order to conduct additional research in the future to understand the impact technology and lifestyles are having on consumer’s viewing behaviors.

However, when second screens were present, attention and engagement to advertising and programming content went down.

“We see there is a bit of a trade-off,” Marci concluded.
media measurement, mobile, nielsen, research, television
6 comments about "Nielsen Probes Viewers' Minds: Finds They Are Distracted By Screens, May Not Comply With People Meters".
Check to receive email when comments are posted.
Read more comments >
Next story loading