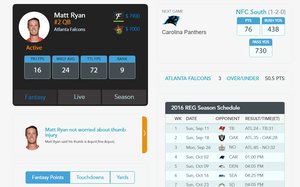 Fantasy sports fans may claim a touchdown at the news of a niche search engine that provides stats and analysis to make it easier for players to create winning starting teams. The data-geek founders call the search engine Spearch.

The site, which aims to speed up the process of analyzing players and customize data, launched for desktop and the mobile Web, but the product road map includes apps for iOS and Android devices, Spearch co-founder Juan Juan said. It took about five months to build the engine after having to restart the project. He said the previous data company didn't provide fantasy sports data and the company had to develop new APIs.

Juan, an avid fantasy sports player, said the site won't use Google AdSense to run ads, but rather Fantasy Alarm, which has an ad network focused on fantasy sports. He said the demographics fit better.

There's no shortage of sites and apps in an industry worth billions of dollars. In fact the app Fananas also launched this week.  Other rivals include sites like FantasyPros.

Anyone can try out Spearch.com now and begin searching an NFL player to get fantasy data, season stats, news, and even live player data. Search two or more players and you will see relevant information in a data table that allows for side-by-side analysis. Spearch has also developed an embed tool that will let anyone post their player analysis results to their site and/or blog.

Site visitors are asked to provide information such as first and last name, and email address, but the potential to collect data seems to go far beyond the startup's immediate vision. Juan said on the back end the site monitors the rosters for the teams and analyzes the data with Google Analytics.

Look at Publishers Clearing House, for example, and the type of data it collects from willing players who frequent the company's network of sites.

There is an embed code for viral marketing, so when a site user does a side-by-side analysis of teams they can embed it on another site or blog.