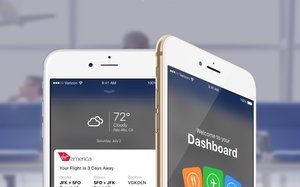 Launched when the mobile app opens, the Dashboard incorporates machine-learning algorithms to help consumers find the correct email or information when needed. It contains a series of interactive "cards" that highlight upcoming events -- for example, an upcoming flight reservation or package delivery tracking number.

Alto email users also have the ability to tell the application that the information appearing is not relevant, helping the company’s machine-learning technology become smarter. Users can also choose to view a traditional email interface if they so choose.

Alto has also unveiled a new "Stacks" feature that compiles industry-specific emails in one place. For example, all social media emails or retail promotions might be condensed into one stack of information to peruse -- similar to Gmail’s Promotions tab.

A majority of consumers have more than one email account, according to The Radicati Group, which places the average email account per user at 1.7 addresses in 2016. The same study found that more than 215.3 billion emails were sent and received per day -- 116.4 billion business emails and 98.9 billion consumer emails.

As of August 2016, the United Nations estimates that the worldwide population is 7.4 billion individuals. That’s almost 30 emails per day per person, and that doesn’t even factor in those who don’t have email addresses. Either way, that’s a lot of emails flooding inboxes every day.

Most email inboxes are organized by who sent the email of by the time it was received. Alto Mail has flipped this on its head by incorporating a feature that organizes email by its content, which could help users tackle email inbox overload.

Originally launched in 2015, Alto Mail offers an email management application that allows consumers to have the option to review all of their individual email accounts separately or to organize and compile them in one place.

Alto Mail is compatible with Google, Microsoft, Yahoo, iCloud and, of course, AOL’s own email suite. The mobile application is available on both iOS and Android devices, and is available for free.