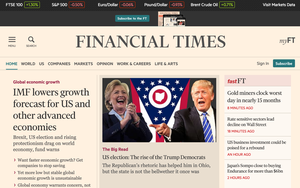 Financial Times has given its Web site ft.com, a makeover, reducing its load times and optimizing it for mobile in an effort to increase readership and its subscriber base.

The site is also more customizable for users, with “smart” navigation and personalization.

FT found that readers are 5% more engaged with the site when the time it takes to load an article is reduced by just one second, Ridding told Reuters.

The London-based publication has halved the time it takes a story to load on desktop to a little over one second <obile devices can now load a story in just over 2 seconds, down from 6 seconds.

“As a result [of the redesign], readers are spending more time on the site and that will help deliver further growth in our global subscriber base,” Ridding said.

Financial Times has about 800,000 subscriptions, two-thirds of which are digital. Digital subscriptions have grown by 16% in the past year. Around 60% of FT’s revenue is now derived from subscriptions and 40% from advertising.

The more content consumed by readers and the more time spent on the site means more online ad space to sell. According to WSJ, since May 2015, Financial Times has set up a model where advertisers pay based on how long their ads are viewed instead ad impressions or clicks.

Ridding told WSJ that 33 advertisers have bought a total of 43 ad campaigns on a cost-per-hour basis.