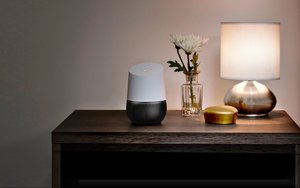 At the Made By Google event Tuesday, Google showcased its newest offerings coming to market later this year, one of which is a voice-controlled smart home hub.

Generally, Google appears to be focusing on injecting its artificial intelligence and machine learning software capabilities into a broader ecosystem of hardware products designed in-house.

The Google Assistant, which is an AI-powered assistant that becomes more personalized with more use, is a core element of the new products.

“Our goal is to build a personal Google for each and every user,” Sundar Pichai, CEO of Google, said at the event.

“We envision the assistant as a two-way conversation, a natural dialogue between our users and Google to help them get things done in the real world.”

Google Home, which was initially teased at another Google event earlier this year, is a smart home hub that aims to do just that.

Similar to Amazon’s Alexa-powered Echo, Google Home is a voice-controlled device that can connect consumers to information, services and entertainment, as well as control devices in their home.

Users can also set Google Home to automatically use their preferred music service.

“If your favorite music service is Spotify, you don’t have to keep saying, ‘On Spotify,’ over and over. We want Google Home to match your preferences,” Rishi Chandra, director of product management at Google, said.

The device is not always listening, since it is activated by saying ‘OK, Google,’ and the voice activation feature can also be disabled with the press of a mute button on the back of the device.

“With Google Home, we give you an easy way to access the knowledge of Google in a hands-free way,” Chandra said.

“Finally, you have an assistant that can bring the knowledge of Google just by asking for it.”

Continuity seems to be a focus of the new products with the Google Assistant operating as a singular personalized AI that is updated as users move between their devices.

For example, Chandra said a consumer could have a conversation with Google Home about travel times to a few different locations of a retail store to decide where to go based on current traffic. Once the destination is set, Google Home could then send those directions to one of the consumer’s other devices.

“Over time, we’re going to make it easy to send the directions right to your phone so you can pick up right where you left off,” Chandra said.

One of the features, which requires users to opt-in, summarizes activities and important information about the day, such as commute times to work, weather and calendar reminders.