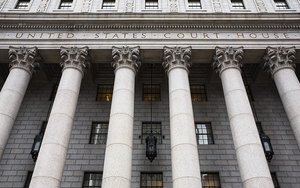 A U.S. Federal District Judge in New York has tossed a class-action shareholder law suit against MDC Partners that alleged a pattern of fraudulent behavior on the part of the company and several of its current and former executives and board members in violation of the Securities Exchange Act.

The suit was filed in July 2015 amid an accounting scandal at the firm that resulted in the forced resignation earlier that month of the company’s founder and then CEO Miles Nadal. Nadal was named in the suit, along with company CFO David Doft, former Chief Accounting Officer Michael Sabatino (who left around the time that Nadal did), General Counsel Mitchell Gendel and former board member and audit committee head George Kirby.

An SEC investigation that began in October 2014 looking at accounting and trading misconduct at MDC is still ongoing. Nadal agreed to pay back about $21 million in bogus expenses and unearned incentive bonuses.

In a 32-page decision issued last Friday, Judge Richard J. Sullivan ruled that the company might have been mismanaged and that negligence might have occurred but that the plaintiffs—led by a California-based institutional pension fund--fell far short of demonstrating in their amended complaint that any fraud on the part of the company or its officials occurred.

Thus, Sullivan granted MDC’s motion to dismiss the suit with prejudice and the case is now closed.

Back in April 2015, MDC Partners investors got scorched when the company disclosed the ongoing SEC investigation. Overnight, the company’s stock price fell nearly 28% to $20.20.

The lawsuit alleged that MDC had overstated the so-called “goodwill” value associated with certain poorly performing or defunct subsidiaries and that the firm used a “misleading” version of EBITDA (earnings before interest, taxes, depreciation and amortization)in financial reports.

The plaintiffs also alleged that the company failed to disclose all of then-CEO Nadal’s compensation and falsely reported that its internal controls over financial reporting were adequate.

As a result of the allegations, plaintiffs claimed they were injured along with other MDC shareholders who bought shares in the 18-month period leading up to April 27, 2015, when the company disclosed the SEC investigation in an earnings release.

Judge Sullivan ruled that the allegations lacked the specificity required by the Securities Act for claims of fraud. Sullivan also ruled that plaintiffs failed to show that defendants intended to commit fraud or to provide any plausible motivation as to why they would want to.

The judge also ruled that alleged misleading MDC statements cited by the plaintiffs to support their case weren’t material as required by law.

Sullivan concluded that much of the plaintiff’s case relied on assertions from a confidential witness in the ongoing SEC investigation.

That witness was previously a consultant that MDC had hired a few years ago to provide advice concerning a number of under-performing companies in MDC’s portfolio. The consultant, KJ Roberts & Co., and MDC had a falling out over compensation that ended up in New York District Court in 2012, when the consultant sued. That case was also tossed after MDC’s motion for summary judgment was granted.