Varick No Longer On Varick, Neither Is Rostkowski 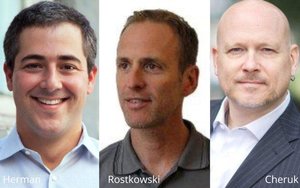 When I ran into Paul Rostkowski and Keith Gooberman at Mitch Oscar’s “Secret Society” meeting at Time Warner Thursday, I took a double take. It was the first time I'd seen the two of them together since Gooberman left as Varick Media Management (VMM)’s top programmatic trader in 2014 to form his own, independent agency trading desk, Programmatic Mechanics.

“We’re working together again,” Gooberman said, making me think he'd reunited with Rostkowksi by rejoining VMM. But no, as it turns out, Rostkowski has stepped down as president of VMM to join Gooberman at Programmatic Mechanics.

What I also didn't know was that Rostkowski was Gooberman’s financial backer in the startup. Which makes sense, because he was such a fan of Gooberman’s when they worked together at VMM.

What’s also not surprising, is that Rostkowski stepped down from VMM, because it’s in the process of being integrated into the sister MDC Partners unit, Assembly. Most ironic of all, Varick Media Management will not longer be located on Varick Street, but in the same building as Assembly’s new offices in Midtown New York.

As it turns out, Programmatic Mechanics was also celebrating its new offices on West 20th Street with an open house last night.

Meanwhile, we agreed the timing couldn’t be better for an independent agency trading desk, now that the best known one, Accordant, is now part of Dentsu Aegis Network's trading desk, Amnet.

Speaking of former VMM presidents, Darren Herman, who founded VMM and served as its initial president, has just landed at Bain Capital Private Equity as its “first digitally focused operating partner.” Or at least, that’s how Herman described it in a posting on Medium. I guess that puts an end to the rumor that Herman was starting his own agency holding company. But maybe now he’ll just buy one.