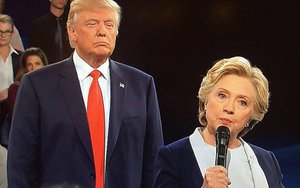 Data from iQ Media said Clinton pulled in $1.63 billion from her appearance versus $1.54 billion for Trump, looking at real-time TV metrics and online media measurement technology.

When it comes to social-media interactions, Nielsen says there were 62 million pieces of social media content from 18.2 million people across Facebook and Twitter. In tweets, Trump was mentioned in 5.5 million Tweets while Hillary was mentioned in 2.1 million.

Researcher iQ Media said Trump had 65% of the total national on-air time for the debate versus Clinton’s 35% -- 7 hours and 38 minutes to 4 hours and 26 minutes -- when looking at all networks that aired the event: ABC, CBS, NBC, Fox, Univision, PBS, CNN, Telemundo, Fox News Channel and MSNBC.