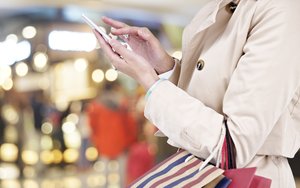 As the annual mobile commerce benchmark of holiday shopping approaches, it looks like it could be yet another mobile moment.

Various pre-holiday shopping studies are coming out providing some insight into where mobile may fit this time around.

This matters due to the massive size of spending over a relatively short period of time. Retail sales between last November and January totaled $969 billion, according to Deloitte, with projections of topping $1 trillion this time around.

While most of the dollars changing hands will happen in stores, digital interactions will influence 67%, or $661 billion, of those sales, according to Deloitte.

So while sales through smartphones may not resemble anything like those in stores, its impact will be everywhere.

This is not to say that mobile sales will be small, since 30% of all online purchases will happen through smartphones this year, according to an analysis of 450 million online sessions conducted by NetElixir.

The reality is that most people always have their phone with them and they use them for shopping all the time. A global mobile shopping study by Nielsen just came out showing that the majority (56%) can’t imagine life without their mobile device and 70% say it makes their life better.

As yet more validation of how consumers are using their phones to shop, Nielsen found that mobile is used frequently during shopping activities. Here’s what they do:

Worldwide, 38% of consumers say they purchased a product or service on their mobile device in the past six months, according to the Nielsen study, which was based on 30,000 online respondents in 63 countries.

On a per-person basis in the U.S., an average of $684 will be spent this holiday season, according to the International Council of Shopping Centers.

Considerably more millennials are purchasing by mobile device, according to Global Web Index. Here’s the percentage of those who made an online purchase via mobile in the last month:

In addition to differences in mobile commerce behavior by demographics, there are differences based on region, according to the Nielsen global study.

For example, while slightly more than a third (36%) of consumers in North America use their phones to compare prices when shopping, more than half (60%) of those in the Asia-Pacific region do.

While 38% of North American consumers look up product information on their phone while shopping, more than half (56%) of those in Asia-Pacific do.

In addition, other mobile activities are likely to lead consumers to become more comfortable using their phones for purchasing.

Nearly half (47%) of consumers globally say they checked an account balance or recent transaction on their mobile device during the previous six months and 42% already have paid a bill using mobile.

The key is that various aspects of mobile are starting to blend together.

Walmart and most recently Kohl’s introduced their own mobile payment systems, basically linked into their respective apps and loyalty programs. Much like Starbucks extended mobile payments to customers already familiar with the Starbucks app for other reasons, retailers like Walmart and Kohl’s are extending functions to programs and customer activities already in place.

Almost half (45%) of all shopping trips already involve some mobile shopping, according to a Facebook IQ study of Internet users, which is no surprise.

With smartphones essentially glued to their owners, 96% of them use those devices to get things done, according to a survey of 14,000 consumers conducted by the research firm Purchased for Google. Before any of those people made a purchase, 30% visited a store, 24% checked out a retailer website or app and 14% visited another website or app.

As holiday shopping approaches, all of these mobile activities will be magnified yet again.