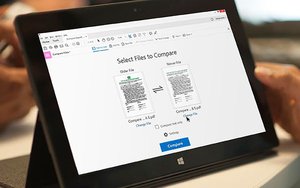 Adobe announced updates to its Document Cloud on Tuesday with additional editing features and a new tool for digital signatures that abides by upcoming regulations in the European Union.

A new Compare Files feature available in Acrobat’s tool list helps maintain version control by enabling users to compare two versions of the same document with any edits that are tracked and color-coded.

The company also produces a report highlighting any assertions or deletions, with a review feature so editors can literally walk through the document change-by-change.

The Compare Files feature is similar to the editing capabilities of Google Docs, except for that it shows two versions of the document side by side. In addition, Acrobat automatically detects two files that look similar and loads them for review. Users also have the opportunity to switch out these documents for different versions if they choose.

Adobe has also unveiled a new Certificates tool to aid in the signing, certification and verification of documents. Adobe has specifically designed the feature to be in compliance with the electronic signature law that recently went into effect in the European Union. As of July 1, digital documents in the European Union must abide by eIDAS regulation aimed at increasing cross-border digital signature.

Lisa Croft, group product marketing manager for Adobe’s Document Cloud, says that Adobe actively monitors laws around the world to keep up-to-date with regional changing regulations. She says it maintains an active legal presence in every region or works with local law offices to keep abreast of local changes in signature requirements and data storage.

Thanks to an integration with Microsoft, Adobe Acrobat is now compatible with Microsoft’s DirectInk technology so Surface Pro users can edit PDF documents on their devices with a stylus pen or finger touch. Croft describes Acrobat’s updates as an ongoing effort by Adobe to help businesses embark on a “digital transformation.”

Eliminating paper copies is also better for the global environment, and Adobe has a Resource Saver Calculatorfor companies to calculate their environmental impact in pounds of wood, waste and gallons of water saved by switching to a digital document-editing tool.
cloud computing, email, mobile
Next story loading