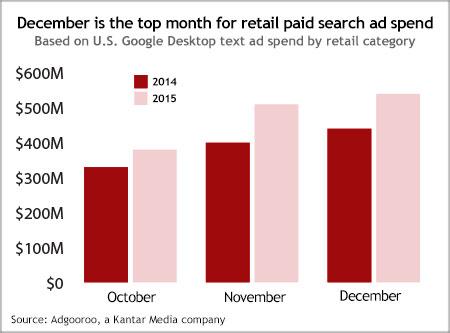 The keywords "black friday 2015" drove $11.7 million in paid-search ad spend during the fourth quarter that same year, ranking it No. 5 in U.S. Google desktop text ad spend among all retail keywords, according to AdGooroo, a Kantar Media company.

Target, Wal-Mart, and JC Penney in aggregate spent more than $33 million in paid-search ads and another $9 million on product listing ads between October and December 2015. Also on that list of heavy spenders: Macy's, Best Buy, Kohl's, Sears, Zappos, Apple, and Nordstrom, estimates AdGooroo.

Retail advertisers spent $1.44 billion on U.S. Google desktop text ads in fourth-quarter 2015, up 24% compared with the year-ago quarter, according to a report titled Preparing for Holiday 2016.

What did retailers get for those millions between October and December in 2015? About 144 million impressions, an average click-through rate of 10.60% at an average cost per click (CPC) of $0.77. AdGooroo estimates that 51 advertisers bid on the phrase "black friday 2015."

Here's another interesting fact that provides insight into how advertisers think about consumer behavior. The majority of spend on Black Friday keywords in 2015 occurred before and after the week of Black Friday.

In fact 64% of paid-search spend on the 161 Black Friday-specific keywords AdGooroo studied was generated in the weeks before and after the Black Friday weekend in 2015.