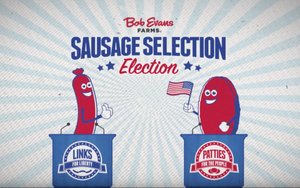 The contentious battle between sausage links and patties has ended with a split decision in the Bob Evans Sausage Selection Election.

According to a national survey by Bob Evans, links are America’s #1 breakfast sausage. In the state-by-state results, 30 states (mainly on the coasts) chose links as the best breakfast sausage versus only 18 states (in the Midwest and South) picking patties. Battleground states, Florida and North Carolina, illustrating again how they earned the moniker, were split 50/50 between the two contenders.

However, patties were the clear winner in the popular vote, with voters online choosing the Farm Boy favorite over the linked variety. With a 2,000-vote lead, patties seemingly are the winner in the hearts and minds of online sausage lovers.

Links are the sausage choice for Millennials and Gen X, but only slightly edge out patties among Baby Boomers and Greatest Generation (59% and 57% vs. 51% and 52%). Results indicate a bit of a gender gap. A clear majority of women chose links (59% vs 41%), but the difference is much less among men (52% vs 48%).

The company was “really encouraged” by how many people were engaged by the Sausage Selection Election, with more than 13,000 voting on the campaign Web site and thousands more showing their support in a photo "voting" booth at the 46th annual Bob Evans Farm Festival, says John Fisher, President, Bob Evans Farms, LLC.

“With the presidential election on the top of the country's mind, we thought it'd be a nice change of pace to run a simple, fun campaign that focused on a subject that everyone can enjoy: breakfast sausage,” Fisher tells Marketing Daily. “While divided by shape, our candidates are united by flavor. In the end, although the opinions about sausage type vary, everyone can agree that sausage is a delicious addition to any breakfast.”

Two videos, “Patties for the People” and “Links for Liberty,” promote the positive attributes of each form of sausage. Patties use a red logo and the video promoting them includes a take-off on a phrase that consumers might be familiar with: “Make Sausage Great Again.” Creative design is from 30 Lines, Columbus, Ohio.

The 2016 Bob Evans Sausage Selection Election Survey was conducted from Aug. 30 through Sept. 8 with 2,500 adults, 50 from each of the 50 U.S. states. The survey was fielded using the Research Now online consumer panel. At the time of the survey, participants had to have been at least 18 years of age or older and live in one of the 50 U.S. states. Age data is reflective to the adult population based on U.S. Census data. Millennials are defined as 18- to-34-year-olds, GenX as 35- to-51-year-olds, Baby Boomer as 52-70 years old, and The Greatest Generation as 71 years old and older. Political affiliation was determined by self-identification as a Democrat (31%), Republican (32%) or Libertarian (2%).