Cloud-based email delivery service SparkPost has been growing at a rate of 1 billion emails sent from its platform month-over-month, the company announced on Monday -- thanks in part to its swift acquisition of MailChimp’s fleeing Mandrill customers.

MailChimp pulled the plug on its free transactional email service Mandrill earlier this year, announcing that the once stand-alone solution will transition to an add-on service for paid MailChimp subscriptions. Mandrill’s roster of 800,000 email developers had two months to either pony up or transition to a new service provider.

Phillip Merrick, CEO of SparkPost, does not have exact figures for how many new customers migrated to SparkPost after Mandrill’s exodus, but he says it numbered “in the tens of thousands, between both free and paid accounts.” SparkPost now has more than 15,000 customers and its client roster includes Pinterest, Zillow and LinkedIn.

Eighty-one percent of Mandrill’s users made the change to switch email providers after the announcement, according to an internal study by Notablist, an email intelligence application, based on the company’s tracker of the email campaigns of more than 500,000 brands.

SparkPost was the most preferred destination according to the report, which illustrated how 21.1% of Mandrill users transitioned to SparkPost. A little less than 20% of users chose to stay with MailChimp as a paid Mandrill subscriber, while 16.4% transitioned to SendGrid and 11.3% to Mailgun.

SparkPost is an API-driven email service built on cloud infrastructure hosted by Amazon Web Services (AWS), which Merrick says has also been a boon to company growth.

“Increasingly we are seeing developers who build their own applications within AWS want their email and other services to be hosted within AWS also,” says Merrick. “Being the only full-featured email service built entirely on AWS helps there.”

Since launching in 2014, SparkPost has recruited 30 marketing technology companies as solution, add-on and integration partners, allowing its customers the flexibility of creating an integrated marketing stack that works best for them. SparkPost’s partner roster includes Movable Ink, Boomtrain and Amazon Web Services (AWS).

“Our partnerships have played a tremendous role in driving awareness and bringing new customers to the SparkPost platform,” says Merrick.  “Since we are focused purely on the back-end email delivery infrastructure our partners can have confidence that we are not aiming to compete with them, which is a major differentiator for us.”

He recommends that other companies should consider partnerships as an opportunity to recruit new customers and offer customized solutions.

“I definitely recommend that other companies make partnering a key part of their business strategy, since it is simply not possible for any one vendor — no matter what size they are — to have a complete solution to a customer’s problem set,” he says. 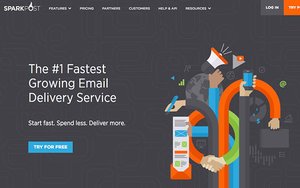