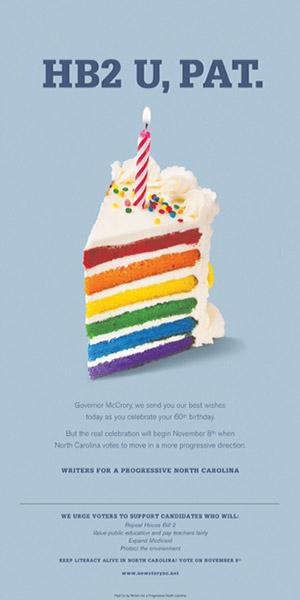 Singer James Taylor has sold one of his guitars to mobilize support to elect a governor who will repeal North Carolina’s anti-transgender“ Bathroom Bill,” a.k.a HB 2.

The creative tweaks the HB2 bill with the headline "HB 2 U, Pat" to replace HB 2 with "Happy Birthday to" and the cake's rainbow colors standing for LGBTQ pride. Lastly, the single candle rising from the cake's middle serves as a not-so-subtle gesture, says the agency. In less oblique terms, the ad urges voters to support candidates who will repeal Mr. McCrory’s bill.

While BooneOakley doesn’t typically wade into political advertising, the NC-based agency did develop an Obama campaign in 2008 as well as a “Kerry licks Bush” ad in 2004.