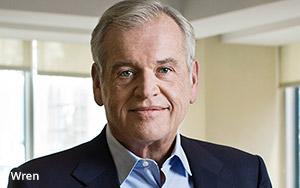 Omnicom Group stock was down more than 2% in Tuesday morning trading after the company issued its third-quarter earnings results, which missed consensus Wall Street growth expectations of 3.4%. The company reported 3.2% organic revenue growth for the third quarter and 3.4% for the first nine months of the year.

On a call with analysts and investors, CEO John Wren said the numbers were in line with internal targets and that the holding company is “on track” to meet full-year 2016 financial goals.

Foreign exchange impact continues to suppress revenues albeit to a lesser extent than in 2015. For the quarter the negative FX impact was $50 million (or 1.3% or revenue) primarily due to the weakening of the British pound against the dollar.

In North America, third-quarter organic growth of 1.7% lagged overall company performance, which was attributed to “difficult comps” versus the year-ago period, Wren said -- noting that the contribution from this year’s Summer Olympics was not as great as past games and that very little revenue is derived from political activity.

The company has reeled in some huge new accounts in recent months, although Wren explained that incremental revenue from the AT&T win will begin to trickle in the current quarter while revenues from the McDonald’s and Volkswagen wins will not begin to flow until January of 2017.

Wren cited two key factors in the firm’s ability to reel in those big accounts, including the company’s sizable investments in data and analytics and its ability to collaborate companywide.

Organic growth in the UK remained sturdy at 5.2%, while Europe overall posted 2% growth. Wren said the company was still sorting out the impact that the UK’s pending exit from the European Union might have on company business.

As for the fourth quarter, Wren said that as usual, there is an estimated $200 million to $250 million in project work that may or may not materialize. Usually it does, although the “crazy” political campaign atmosphere is an added wrench in the works. “All the noise isn’t contributing anything,” he said. Clients want to “put this behind us” -- particularly with regard to how Congress will take shape when the election results are in.

Accuen, the company’s programmatic arm, contributed about $10 million in revenue in the third quarter.

But according to Pivotal research analyst Brian Wieser, the firm’s non-transparent options make it a little more difficult to assess company performance.

“Overall, interpreting Omnicom’s quarterly results remains somewhat challenging when comparing them vs. peers given the scaled, but generally non-specified presence of principal-based or pass-through activity in organic revenue figures at Omnicom,” Wieser stated in a client note after Omnicom released its earnings.

“These activities extend beyond the company’s trading desk, Accuen, to include revenue streams associated with entities such as Icon (barter) and OmNet (proprietary trading of traditional media) as well as activities in the company’s CRM businesses. Management indicated that growth at Accuen accounted for $10mm in new revenue during the quarter, barely an amount worth noting by itself. However, we note that additional data on the aforementioned units would provide greater insight on the contribution of these businesses to revenues and profitability.”