Credit One Links Sweepstakes To NASCAR 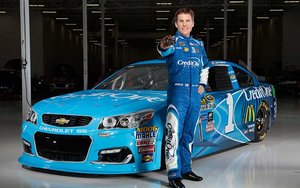 Credit One is building a sweepstakes around its NASCAR sponsorship.

The Ultimate Race Weekend winner will receive two tickets to a 2017 NASCAR Cup Series race of his or her choice, a VIP experience and a behind-the-scenes tour, roundtrip airfare and hotel accommodations and $1,000 spending money.

NASCAR fans can enter by going to a dedicated Web site to see if they pre-qualify for the Official Credit Card of NASCAR. Existing cardmembers will automatically receive one entry into the sweepstakes, which runs through Dec. 31.

Going behind the scenes is something that most fans only dream about, says Laura Faulkner, vice president of marketing communications, Credit One Bank.

“This sweepstakes is an opportunity to introduce more fans to the Official Credit Card of NASCAR and reward them simply for seeing if they pre-qualify for the card,” Faulkner says in a release. “Plus, we’re able to thank all of our existing NASCAR Visa cardmembers for their loyalty by providing them with an automatic entry for a chance to win.”

The Credit One Bank NASCAR credit card offers 1% cash back on eligible purchases and 2% cash back on purchases made at NASCAR.com. Cardmembers also benefit from exclusive discounts from retail partners such as Fanatics and the NASCAR Racing Experience.

Credit One Bank is the Official Credit Card of NASCAR. The financial services institution announced a multi-year partnership with NASCAR in February to include official agreements with both the sanctioning body and Chip Ganassi Racing. The No. 1 Credit One Bank Chevy SS debuted April 24 on the track at Richmond International Raceway.