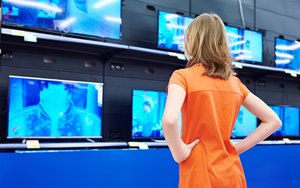 For all the effort television makers are putting behind building their brands and touting new technology such as 4K ultra-high definition and Internet connectivity, consumers are still most swayed by price.

According to InfoScout, 79% of TV buyers said they either didn’t have a preferred brand in mind when setting out to purchase a set, or changed their mind when walking into the store. Only 26% of them said the features like 4K resolution and Smart TV functionality were important to their purchase decisions.

For most, the decision came down to price and size, says Bob Goodwin, practice leader for consumer technology for InfoScout. Since switching from CRT sets to flat-screens many years ago, consumers are now perceiving a sense of parity in the market, he says.

“People are now buying their third or fourth flat-panel TV, and at that point, there’s no confusion about them,” Goodwin tells Marketing Daily. “At some point, having blacker blacks doesn’t mean a lot to a lot of people.”

According to the study of 840 consumers who had purchased a TV within the last 60 days, only one in five buyers (21%) walked out of the store with the brand they intended to purchase. The rest either didn’t have a brand in mind or changed their mind in the store.

Although consumers are not sold on some of the advanced features on some of the newer television sets, and are not particularly influenced by in-store merchandising or in-store salespeople when making a decision, brands that are setting up special, branded in-store areas (like Samsung and LG in Best Buy stores) may on the right track to selling potential customers on their sets, Goodwin says.

“These ‘store-in-store’ areas are creating a different buying experience,” he says. “They can tell their brand stories the way they want to.”