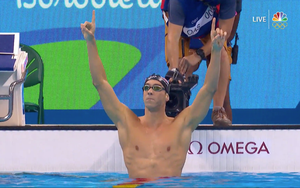 Even with the airing of the Rio Olympics, commercial TV ratings -- still the dominant TV currency for marketers -- declined 3% in the third quarter.

NBC -- which aired the Olympics -- was up 65% in C3 ratings (the average commercial minute rating plus three days of time-shifted viewing) among 18-49 viewers, according to Bernstein Research. ABC, was down 2%; CBS, off 11%, and Fox, losing 22%.

Broadcast networks were up 6% in prime time, with adult ad-supported cable networks down 8%. Kids cable (total day viewing) was down 1%.

Were it not for much higher ratings from the cable news networks, due to strong interest in the big political season, ad-supported adult cable networks would have dropped 10% during the quarter.

Bernstein Research said Fox was down because of unfavorable comparisons to the FIFA Women’s World Cup a year ago in the same time period, as well as poorer-performing summer shows “MasterChef” and “Wayward Pines.”

The best-performing cable network group was Time Warner, largely due to better numbers from CNN, which was up 1% in C3 18-49 prime time.

Overall prime time viewers during the period were up 1%. Bernstein Research says this was probably due to decreased DVR viewing outside the three-day time-shifted video -- due to more live viewing of the Olympics.

Looking at specific months, August 2016 was the first positive C3 ratings period (up 5%) since February 2014 (up 3%). August of this year had the Rio Summer Olympics and February 2014 was the Sochi Winter Olympics.