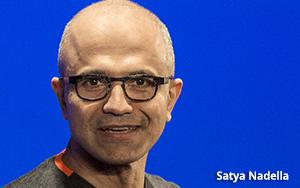 Are consumers better off with Microsoft in the world? "Why does the world need Microsoft?" CEO Satya Nadella asked during an interview with The Wall Street Journal. "Let's say we just disappeared. Would everyone be well served?"

That focus on purpose and identity keeps Nadella in sync. The change in corporate culture since Nadella took the reins from Steve Ballmer in 2014 continues to feed Microsoft's growth. "Customers will only be happy if we serve some purpose," he said.

It may take technology. So what does a company culture look like that doesn't fight innovation, new concepts and capabilities? Nadella said it takes a company filled with "learn it alls," a concept taken from a child psychologist. "We want to push to be more of a 'learn it all' culture than a 'know it all'," he said.

How do you change a corporate culture, especially when it's associated with the founder? "The job at the top is to set the standard, genuine and authentic, he said. This is the mindset: As an employee, don't think about how you work for Microsoft, but how Microsoft's platform works for every one of its employees.

Keeping employees happy also leads to innovation. The second annual Campaign U.S. Morale Survey, released Monday, suggests that 73% of those in the advertising industry believe "company leadership" is the top factor contributing to their dissatisfaction. Some 58% of those with low morale admit the leadership at their company is "inadequate," while only 3% rated it as "exceptional."

The other top two reasons that follow include “lack of advancement” at 45% and “dissatisfaction with work” at 38%. "Lack of diversity” at 13% and “company performance” at 14% were the least cited.

Employees with high morale cited different causes for their mood. The 22% who rated their moral as "satisfactory;” 20%, “good;" or 12%, “excellent” most often chose a better work and life balance as the prime reasons. “Satisfaction with work” was second with 49% and “creative freedom” was third with 44%.