If Adland Succeeds In Diversifying, The 3% Conference Shouldn't Exist In Five Years 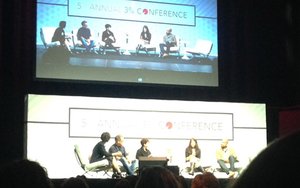 The current hiring process used by the industry is a problem beyond basic demographics. Even if agencies hire more women or minorities, their approach is likely to be similar since ad schools are graduating students whose portfolios all look the same because they are being trained to think the same way, says Robinson. "We used to pick up a kid that is a bartender because he is really funny. Let's try that again, See if it works."

KBS's Peltz-Zatulove recommends agencies stop hiring recruiters. They are just a pipeline for the agency. "Get outside of your comfort zone," she says. "Find voices that drive a different conversation."

GSD&M is launching what it calls the "Moneyball of creative recruitment" to break free from a "broken model" that brings the intrinsic desire to hire a “car guy” to work on the Dodge account, says Russell.

His agency has developed a "periodic table" that "uses Big Data to build a system of what they love, their interests, their strengths. It goes way beyond the account," says Russell. The agency then pairs the right teams with the right briefs. "[These new voices] are opening up problems we didn't think to have," he says.

Panelists agree that diversity is not necessarily about hiring for specific boxes: race, gender, sexuality. "We are hiring for voices. We step back and look at what we don't have," says Russell. "That starts to build an environment and the culture of the agency."

Diversity is work, says Graves. "You are more likely to create the Justice League than create people with the same taste. You have to do the work."

This "work" means rebuilding the culture of the agency. GSD&M, for instance, is conscious about being vulnerable. Publicly. "It is possible to be confident and vulnerable," says Russell.

Joan prioritizes picking people that have the same values, says Robinson. "It's about human kindness and collaboration. And once you do that create an environment," she says. As a founder, "I am open to criticism too. It matters to me what you think."

KBS Ventures acts like a real-life "Shark Tank" to give its workers exposure to things they don't normally experience, says Peltz-Zatulove. Entrepreneurship and the start-up culture tends to be glamorized, so this program makes them appreciate the challenges and opportunities that these smaller companies have. Plus, it helps them appreciate some of the advantages of a big media company.

Panelists say agency supervisors need to take more responsibility over their culture. Far too many managers aren't honest on evaluations and create unrealistic expectations where people expect promotions each year.

It's also important to let talent move to other agencies, they say. "It's okay to let Tom go," says Russell. "They come back. You want to support them and hopefully it is never about money. Put yourself in their shoes and if it is [a better opportunity], push them out, they will come back and we will be better for it."

Yet it is easier to sign a pledge and hire a few token workers than rework their entire culture. "We are lazy. The industry only moves so far," says Graves. "If we are to make the changes we talk about, what are we doing once we leave here and hold ourselves accountable? Five years from now, we shouldn't have this conference."

agency, diversity
1 comment about "If Adland Succeeds In Diversifying, The 3% Conference Shouldn't Exist In Five Years".
Check to receive email when comments are posted.
Next story loading