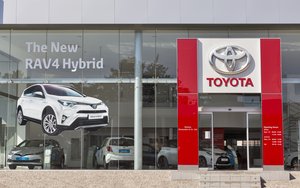 Toyota is appointing ad-marketing group The&Partnership as its single, integrated agency partner for all creative, marketing, digital and media activities across Europe.

The award represents nearly $300 million in advertising and marketing spending by the client. Publicis Groupe agencies including Saatchi & Saatchi and Zenith previously handled the assignment.

The&Partnership will set up an integrated network of dedicated hubs for Toyota in order to support the car maker's transition towards a digital-first model.

This newly named ‘&TOYOTA’ network will be led by a specialist data analytics unit that will integrate data driven creative with media planning.

The move represents and expansion of Toyota’s relationship with The&Partnership. The carmaker has worked with the group’s creative agency CHI&Partners for years and won a Gold Cyber Lion at Cannes in 2016 on behalf of Lexus Hoverboard.

“Our ambition is to strengthen Toyota’s brand image in Europe by producing ever better cars, communicating a clear brand purpose and maximizing the effectiveness of our media investments," stated Karl Schlicht, EVP, Toyota Motor Europe. "We believe a new business model is required to achieve this – one that is more integrated and customer-centric – with digital transformation at its heart."

The win represents a nice success story for London's marketing industry in the wake of the Brexit vote. It follows the creation of a series of bespoke agencies by The&Partnership over recent years, including Pulse Creative, the new, full-service agency for News UK; The Fuse for The Wall Street Journal / Dow Jones.

The marketing firm has also set up a similar operation for telecommunications company Telus in Canada.