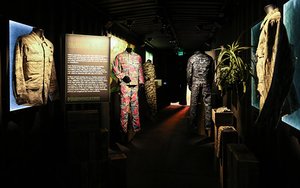 Mountain Dew just launched a collection of apparel and accessories that incorporate different types of tech directly in the products, as well as an experiential push using augmented reality.

Along with the new product line, the brand built out its Camo Collective experiential activation, which include three different stages of past, present and future visions for the use of camouflage as a print.

The Camo Out collection, which came from a collaborative effort between Mountain Dew’s Green Label and VFILES, includes a hat, Bluetooth jacket, solar-powered backpack and jackets and pants with built-in headphones.

These products are not like tracking and sensor-bearing wearables, but instead are aimed at integrating media-based tech into wearable products.

A virtually undetectable camera is integrated into the hat, which connects wirelessly to share photos and videos via a consumer’s smartphone, and the Bluetooth jacket has wireless speakers embedded in its hood.

The solar-powered backpack collects and stores power to be accessed via on-board USB ports.

The Camo Out apparel and accessories line was showcased at the ComplexCon tradeshow and incorporated other IoT products for the experiential activation, which was designed and executed by Oregon-based studio dotdotdash.

Augmented reality was used in the activation to emulate the future vision of camouflaging a person in-real time. This was done by using body-mapping techniques through cameras and then software, as well as a physical cloaking device worn by the consumer to blend his or her image to be camouflaged in the image on the display in front of them.

This isn’t the first introduction of connected clothing.

Earlier this year, New York fashion brand Rochambeau launched a jacket that has an NFC tag and QR code built into one of the sleeves, although it appears to be more about targeting experiences and access, versus personal media consumption.

The tags in the jacket, when activated by smartphone, can unlock select experiences throughout the city of New York, such as a VIP pass to an exclusive event or personal tour at New Release gallery.