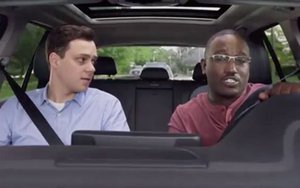 One of the biggest problems facing advanced connected car technology today is that it can be hard to understand what it does and how it benefits drivers. With one in four cars having access to this technology, Harman is using humor to raise awareness about its in-vehicle technology.

Developed with AOR KBS, the campaign features comedian Hannibal Buress alongside a Harman engineer to highlight the various advantages of the technology.

The Hannibal Has Trouble ad shows him with his passenger laughing about how he really isn't driving in a car despite appearances making him look so. The Hannibal Gets Cybersecurityspot has him explaining the cybersecurity controls by joking about pictures he doesn't want acknowledged.

Hannibal tells it like it is, which makes him a good fit for this campaign, according to the agency. "We can see ourselves in him and he asks the same questions that we as consumers would have about new technology in cars," says Emily Robbins, business director, KBS. "In short, he helps simplify the complicated."

The campaign features four 30-second spots as well as a microsite and pre-roll creative. The digital buy spans  targeted sites like Gizmodo, Wired, BBC and YouTube in order to help Harman reach a more diverse audience. All campaign assets were produced in-house at KBS.