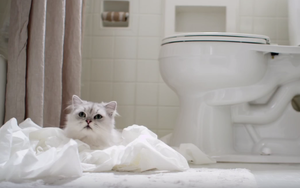 PetSafe is promoting its scoop-free self-cleaning litter box via a campaign which includes a humorous video.

The two-minute film is shot from the point of view of a group of cats who are trying to figure out why humans are so obsessed with their litter box habits. In addition to Facebook and YouTube, a dedicated  Web site also hosts the video. The campaign is the first work for the company from Humanaut.

In “Catspiracies,” cats observe their owners’ odd behavioral shift after purchasing the time- and touch-saving ScoopFree device, which sweeps the waste and odor out of sight once the pet is done with its business. They suspect that their feces is “very valuable” and perhaps their owners are selling it on the “secret black turd market.”

The creative was also edited in 30- and 15-second increments. Static banner ads that resemble memes link to the Catspiracies landing page that bears the marks of crude conspiracy Web sites, such as flashing lights and a tendency to exaggerate punctuation.

PetSafe has created videos in the past, but usually focuses on how to set up and use PetSafe products, says Ryan Anderson, PetSafe category manager.

“The ScoopFree Catspiracies video series is the first awareness-focused video campaign with an edgy and engaging spin that PetSafe has produced,” Anderson tells Marketing Daily. “In the past, marketing for the brand consisted of digital advertising, television and social media marketing.”

The campaign is a multi-tiered digital approach. The ScoopFree litter box will also be supported in store with end-cap placements and promotion in major pet retailers across the country. While presumably created by cats for cats, the creative is actually designed to appeal to cat owners who use technology and like to read, cook and shop. The coveted “cat lady” demo — affluent females age 45-65 who own two or more cats — is the sweet spot, per the agency.

“We hope this is the first of many campaigns that combine the amazing solutions the PetSafe brand has to offer with engaging content,” Anderson says. “We are aiming to bring the fun and humor that many of us pet parents experience into more of our marketing efforts.”