Consumers who browse, and search for discounts, deals and things to do typically prefer doing so on the mobile Web. In fact, when doing these tasks, 79% participating in the study from Google say they prefer mobile Web sites versus apps.

The report — How people discover, use, and stay engaged with apps — released Wednesday shares insight into smartphone use so advertisers can design the most effective mobile strategies. The 15-minute questionnaire, conducted in October 2016, asked users in the U.S. ages 16 to 64 to share insights on how they find, use and engage with apps.

It makes sense that most of the activities preferred on an app relate to entertainment such as watching movies or listing to music or playing games, as well as navigation and monitoring physical activities.

Those who download apps delete them for a variety of reasons. Some 55% delete apps because they no longer have a need for it. About 53% delete apps to free up memory on the device, and 50% said they might delete an app because it wasn't as useful as they first thought.

Those who use apps find them in a variety of ways. The most common way to discover new apps: people typically turn to those they trust such as friends and family. In fact, 51% rely on friends and family that use the apps; 48%, find the apps by browsing the stores, 34% take the recommendation of the app store, 33% saw an ad while using another app, and 32% read about the app online. Some 31% admit to downloading an app after seeing the ad for the app while browsing the Web, 26% saw the app in an ad on TV, 21% found it through search engines, and 20% saw the ad on YouTube.

Deciding to install the app after finding it requires a careful decision. Price and privacy are the most important factors, at 85% vs. 84%, respectively. Some 71% said it will depend on how much they will use the app, followed by the description of the app at 71%, how much memory the app will use, 66%; reviews, 61%; ratings, 60%; whether friends and family use it, 28%; number of users, 28%; and a video about the app, 20%.

Interestingly, 50% of those who have downloaded apps have never paid for one. The top reasons for paying for an app include that it had the desired content, offered features and functions unavailable in a free version, the person wanted an ad-free app, there were no alternatives, and the app had a good review.

The apps that get the most use are easy to navigate, provide new things to explore, are personalized, and send reminders and notification.

Push notifications that provide value are most useful. Some 42% say they prefer useful notifications like when a purchase is shipped and delivered; 35%, reminders of an upcoming reservation or appointment; and 35%, new discounts and offers. 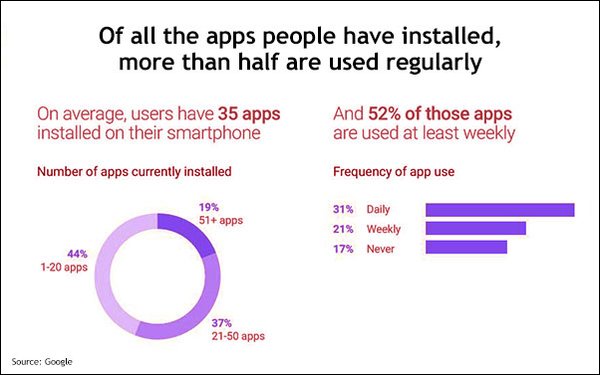