Ad Execs United On Data Ownership, Divided On Whether It Belongs To Agencies Or Clients

The debate over who rightfully owns the data generated by digital ads served to consumers' browsers and devices has been raging ever since media-buying giant GroupM first invoked changes in the terms and conditions of its buys with publishers and other third parties beginning in early 2009.

At the time, GroupM changed the wording on all the invoices it exchanges with publishers asserting that data generated by ads served belongs to the “agency/advertiser.”

Since then, the amount of data has grown, but has also increasingly become consolidated within so-called “walled gardens,” such as Google and Facebook, which have become gatekeepers for targeting consumers with digital ads.

That trend has caused a rift and increasing consternation on Madison Avenue and among big brands and is one of the chief reasons GroupM has reorganized its digital data infrastructure around its own “platform,” dubbed [m]Platform, announced this week.

Unrelated to this move, MediaPost recently fielded a survey of advertiser and agency executives with Advertiser Perceptions Inc., asking them who they currently believe to be the rightful owner of data generated by digital ads served to consumers browsers and mobile devices.

Overwhelmingly, the respondents believe it is owned by the ad industry, but there is a substantial rift among respondents in terms of which constituent is more the rightful owner: the advertiser or the agency.

Not surprisingly, the majority of marketers (60%), believe they are the rightful owner, although nearly half (49%) believe the agency also is.

Agency executives were more circumspect in their responses, but among those weighing in, they believe agencies are the more rightful owner by a margin of nearly two to one: 35% said agencies, while only 19% said advertisers.

In terms of stakeholders, a higher percentage of agency executives than marketers believe that other third parties -- including publishers, consumers and even the walled gardens -- are the more rightful owner.

The findings are based on the responses of 303 ad executives -- weighted 60/40 agencies vs. advertisers -- to an online survey fielded by Advertiser Perceptions in October. 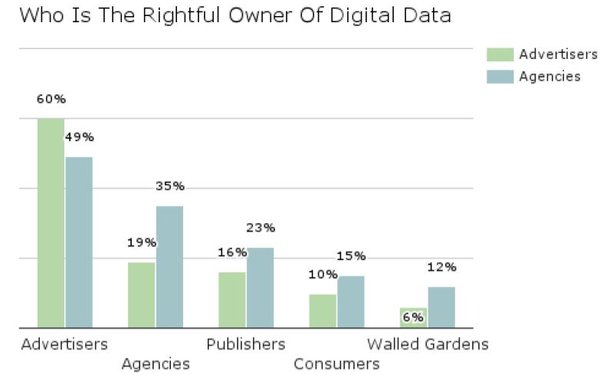 advertising, agency, data management, search
9 comments about "Ad Execs United On Data Ownership, Divided On Whether It Belongs To Agencies Or Clients".
Check to receive email when comments are posted.
Read more comments >
Next story loading