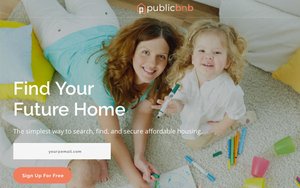 The two technology companies announced PublicBnB on Monday, an application that will provide a community-based marketplace for affordable housing. The application leverages SparkPost’s email service to facilitate communication between prospective tenants and landlords with available rental units.

PublicBnB matches landlords with available living spaces such as rooms, units or houses with participants in the Housing Choice Vouchers public housing assistance program. Previously known as Section 8, the public housing assistance program has over 2 million participants, but a quarter of a million households have been unable to find a home due to the limited housing supply.

Prospective tenants can search for properties based on various filters such as location and cost, and send email inquiries and applications for available housing. SparkPost’s Web relay hook ensures that all email communication is secure and anonymous.

“That anonymity is critical to improving the selection process on the part of the landlord or tenant because they will only be able to base their decisions on information relevant to the transaction,” states Phillip Merrick, CEO of SparkPost. “Users will be able to send and receive transactional emails such as notifications of application submissions, denials, and approvals without having to provide personal information."

Landlords can quickly create property listings and send requests to the local housing authority to schedule inspections upon the applicant’s approval, facilitating a faster certification for their public-housing units.

A lack of affordable housing can have dire consequences, as evident by the deadly fire that swept through a working and living space in Oakland over the weekend. At least 36 people, many of them artists, lost their lives when a fast-moving fire destroyed a warehouse that had been converted into an un-permitted artist’s studio.

Oakland is now the fourth-most expensive city for a renter to live in the United States, according to an April rental report by Zumper, and those priced out of real housing are left to fend for themselves in makeshift homes. Nearby San Francisco ranks as the top most expensive city for renters, with San Jose closing out the top five.

“We see PublicBnB -- and housing in general -- as a catalyst for life changing moments like getting a better job or a simple bank account, which drives our immediacy in providing an auxiliary supply of affordable housing to prospective tenants," says Marlon Frausto, founder and CEO of DwellWell. "AirBnB, for example, has already uncovered an excess capacity of over half a million units for short-term stays in the United States alone; similarly, we want to discover how many people are open to generating an extra source of income by helping to provide longer-term housing for a family in need which will greatly improve their quality of life."

DwellWell plans to send Beta program invites for hosts and prospective tenants to try the PublicBnB application on December 19, 2016.